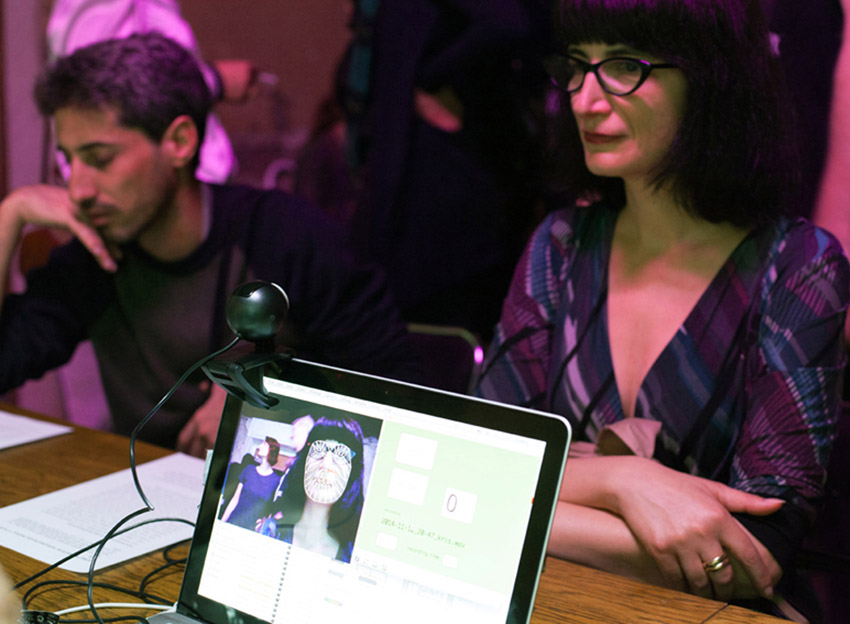 Before accessing the bar, visitors’ faces were anaylsed using facial recognition algorithms. A continually developing sound installation was created by the mapping of a sonic portrait for each face entering the venue.

Investigating how the surveillance of identity can lead to a biological reductionism, I programmed a basic form of digital synthesis to emphasise the reductive process of digitally encoding the face into a few basic measurements. What does this mean when our identities, choices, and personalities are transformed into streams of data under the algorithmic gaze?

*Facial detection / recognition technologies (FRT) use mathematical algorithms to create a digital template of a person’s face, otherwise known as a face print. FRT when employed as a surveillance technology, (for example some CCTV cameras in London, China and the U.S.A.) requires no involvement from the person that is being surveyed or incidentally captured by camera. Unlike other biometrics FRT can operate anonymously in the background. People do not need to surrender their face image as they would their fingerprint or their iris scan. A face can be captured and (de)coded without the person’s consent or active participation. FRT is therefore considered to be a ‘silent technology’.

FRT underlies internet activities such as tagging yourself and others in photos uploaded to social media sites and is used within photo management applications such as Apple’s iPhoto and Google’s Picassa. In 2011 Facebook introduced FRT to automatically identify faces in uploaded photos by comparing them to other tagged pictures. It was rolled out without warning -- a move that backfired in the EU as regulators and privacy campaigners forced the social networking site to turn off the functionality. Facebook have announced plans to extend facial recognition to profile photos in other parts of the world and consequently hold the largest biometric database in the world. The Tesco supermarket chain in the U.K plan to install facial detection technology at petrol station forecourts in order to tailor advertising according to customers sex and age, while cueing at the checkout. Since 2005 the Bundeskriminalamt offers centralized facial recognition on mug shot images for all German police agencies. 45 new eGates, (an automated border processing system that uses FRT to compare the face of the individual with the image in the e-passport microchip), are operational at 10 locations in Germany; Frankfurt, Munich, Hamburg and Dusseldorf Airport. By the end of 2014 at least 32 more eGates are scheduled to be installed.