A long awaited release from Minit culminates in a masterpiece collection of spectral drone music. With their unhierarchical approach to the use of 'found' sound, a fuzzed out electric bass line sits neatly alongside field recordings of atmospheric hum - their individual sound qualities overriding their semiotic value, so that each sound, representing a layer, shimmers and swells within Minit's evolving, sonic habitat. Now Right Here, the title track as well as the album, is about being caught in the moment. From fragile harmonic and melodic intonations to towering, ecstatic drones and electrical disturbances this album captures a balance betwen noise and harmony, excitation and calmness, distance and intimacy - drawing you into a hypnotic, psychedelic sound-world that belongs uniquely to Minit. Now Right Here is a fragile, immersive and emotional album.

'Think Fennesz - no beat, melody or instruments but the hook remains.'
Flux, UK 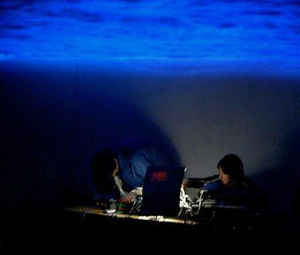 MINIT is Jasmine Guffond and Torben Tilly formed in Sydney in 1997. They use electronic, digital, sampling and mixing technologies to manipulate recorded and "found" sound and to transcend conventional instrumental approaches to musical composition. Their releases convey a unique meeting of improvised abstract electronics and stripped back minimalist design, yet reveal a penchant for the unexpected, either as a melodic twist into song or as a sudden implosion into chaotic spectral noise.

Minit's debut full-length cd ‘music’ on the Sigma Editions label in 1999 saw them tour throughout Europe the same year alongside Vladislav Delay, Parmentier and D. Haines. In 2000, they released the ‘cc/bb’ lp on Sigma Editions and toured Europe again with a Sigma staple of artists. Minit have released a 7" on Cologne-based label Tonschacht, and individual works on various compilations including Motion: Movements in Australian Sound on Sydney-based label Preservation.

'Thursday night in the tiny, dimly-lit 'bunker' of the Mission Theatre sees Sydney based duo Minit deliver an awesome set of minimalist electronics - exquisitely controlled tones, drones and half hidden rhythms providing one of the most gripping performances of the week.'
Dave Howell, 'On Location: This is Not Art Festival, Newcastle, Australia,' The Wire, November 2001